Hello everyone
To you our friends in Germany and Switzerland. We are saddened to inform you that we lost one of our Guardian (Benter Awino) who was the grandmother of Christine Awino and passed on three week ago and  was laid to rest on 25th of November 2022. As Alpha-Care-Kenya e.V. and Hope-Foundation-Kenya fraternity, we came together as a family to give our fellow a good send off . Thank you so much for the support you gave towards the funeral arrangements .It was highly appreciateted.

And on that note, I would like to give a little overview of the African culture on the death rite specifically the Luo community.

In the Luo community we have three rites of passage which is Birth, Marriage and Death .I would like to share with you how we handle death as a rite of passage .Death is celebrated in Africa as it marks the final phase of human life . The life lived by the dead is celebrated by giving a proper send off which is channelled through a procedure .

When one dies, the body is taken to the mortuary for preservation as the funeral arrangements are underway. The storage period normally takes three weeks to one month, depending on the financial capability. During this period the berieved family is visited by friends and relatives for condolences .Once everything is ready the body of the dead is brought home carried in a casket , the body is not burried immediately but instead,  it’s left overnight for night vigil after which the body is lowered into the grave a day after …the burial ceremony is encountered by tributes and a holy mass .

After the burial, the immediate family of the dead stays around for three days mourning the dead ,upon the expiry of the these three days , a ritual of hair shaving is performed on the immediate family members and in order show the grief. Shaving of hair is the very last step of the death rite .After this event people can leave at their own time and go back to their various places ….a year later , an anniversary is done for the dead as a way of remembering the dead .

MY GRANDMA BENTER AWINO
The late mama Benter Awino, mostly known to be many as Nyomira-the daughter of Omira, was born in 1939 to the late Mzee. Joshua Omira Oiro and the late Mama Anne Akede Omira of Gem Yala , Ngina Location. She was brought up in a polygamous family having her step– mother called Anastacia Adhiambo Omira. She was the only remaining daughter alive in her family. Her departed siblings include to the late Magdaline Ambogo, the late Plister Mayamba, the late Margaret Awang’o, the late Leah Onyiengo, the late Joseph Obiero, the late Meshack Opondo ,the late James Omira among others. Benter was the aunt to Adhiambo, and others. Cousin to Filgona Owido, Gabriel among others.
Mama Benter was married to the late Mzee Tobias Hongo Okello in a colorful and memorable wedding. They were blessed with seven children namely; Aloyce, the late Monicah, Pamela, the late Julius (my father), Charles, the late Kevin and Fredrick. She was the mother -in -law to the late Rose, Norah, the late Maurine, Beatrice, Jane, and Grace among others. In her marriage life, she became a widow, where through her hard work in farming and business, she managed to raise her children and her many grandchildren as both the father and the mother died. She has left behind 41 grandchildren including Christine and Dickens both of whom she was taking care of as the capacity of a guardian. She also had 25 great grandchildren.
She was a strong catholic and a faithful mother who servers her church members with dignity and respect. Regardless of your status, she was prayerful and always spent her time praying for her family more so her grandchildren.
Nyomira has never been any seriously sick even though having been complaining of head ache (not often) and she would be relieved after taking some painkillers, thereafter, she would continue with her duties as usual.
On Saturday 29/10/2022, having taken her meals, Nyar Yala-daughter from Yala (as she was referred to by some members of her community); went to rest as usual and then suddenly there was a change in her breath and Nyar Yala was no more-at the age of 83 years. Nyomira died! Go well dani-grandma! 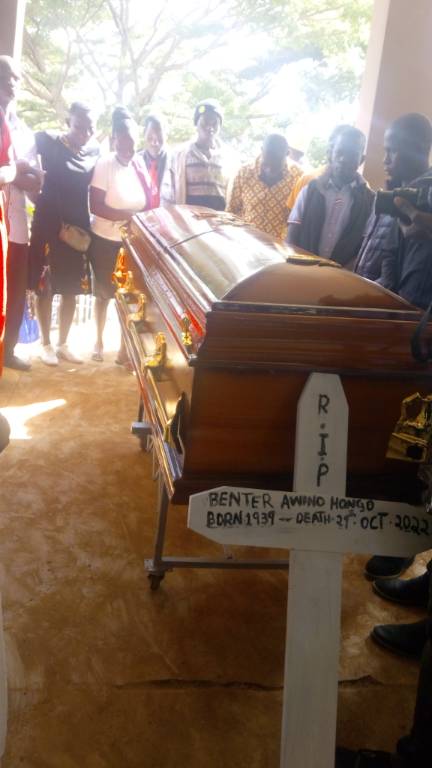